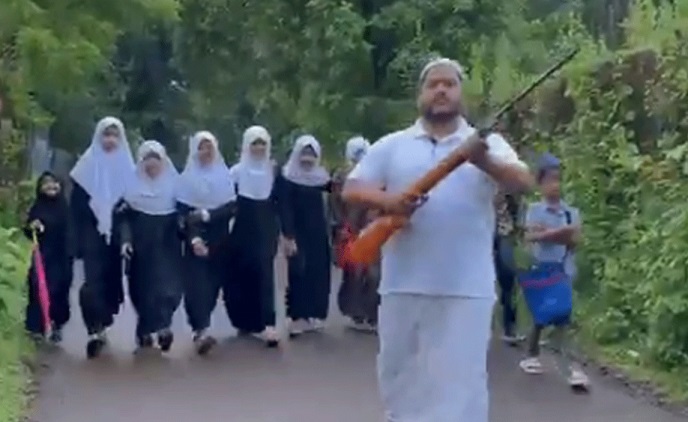 Kasaragod, 18 Sep 2022 [Fik/News Sources]: Seeking to guard his children against stray dogs, a man carries an air gun while escorting young ones to their school in the Kasaragod.

Amid reports of increasing stray dog menace across the state, the video of an armed man escorting a group of children to school has gone viral on social media.

He could be seen walking in front of the children with the gun and saying he will shoot any stray dog if it attacks.

He later told a television channel that it was his responsibility as a father to ensure the protection of his children.

The man, Sameer, pointed out that he was forced to carry the gun as his own children and those of his neighbours stopped going to school for fear of stray dogs, which has been an issue in the area for some time.

"A madrasa student was bitten by a stray dog the other day. So, all the children here were scared to go out and walk to the madrasa. So, I decided to give them security," he said, adding that his son shot the video and posted it on social media.

A native of Bakel in the Kasaragod district, he, too, said no licence is needed to carry an air gun.

"I’m not afraid of legal action, as I don’t kill any dog. But if any dog attacks, I will have to shoot it for self-protection," the man added.

When contacted, police said they were aware of the incident but no complaint has been received in this regard so far.

Of late, the state has been seeing a rise in attacks by strays. The Kerala High Court had then intervened to issue a slew of directions for proper implementation of Animal Birth Control (ABC) measures and vaccination of dogs.

Despite that, it had to intervene this time as well to remind the state of its obligation to protect the citizens and to caution the general public against taking the law into their hands.

Amid mounting criticism of the government’s inability to control the canine population or instil confidence regarding the efficacy of the anti-rabies vaccine, the state government and its various authorities have initiated steps to address the menace on a war footing.

In an effort to allay public fears, the government announced measures including a State-wide mass vaccination campaign from September 20 to October 20 for vaccinating stray and pet dogs and opening more Animal Birth Control centres.