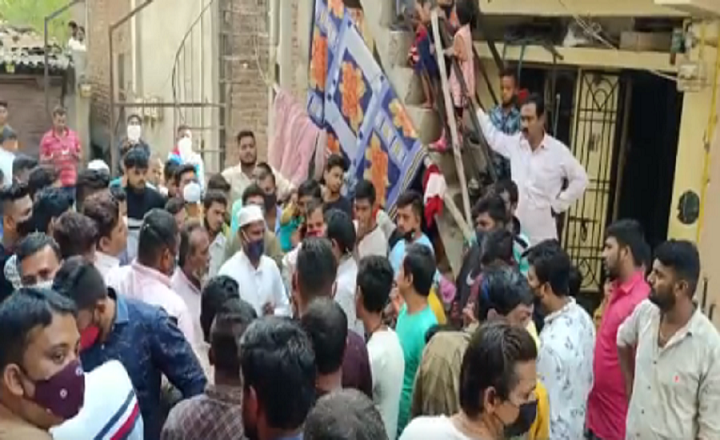 Videos of the incident emerged on social media showing a group of people entering the mosque with their footwear on. Another video footage captured some people forcing the worshippers to leave the mosque while yet another showed some intruders arguing with a cleric inquiring from him as to how many people visit the mosque and since when they were offering prayers there.

The cleric can be heard saying he lives in the nearby society and has been praying, along with many other Muslims, for long.  The mob is heard ordering him to stop the namaz at the mosque citing is coronavirus restrictions. Instead, they said, they could pray at home.

As per the notifications issued by the Gujarat government, a religious gathering of 150 people are allowed in the state. Even otherwise how could a group of men in their personal capacity take upon themselves the task of policing which is reserved for the police.

Recounting the incident, the Imam of the mosque Aaqib Ansari told Clarion India that the group of approximately 100 men suddenly entered the mosque amid chants of ‘Jai Shri Ram’ and announced, “Shut down the mosque, namaz won’t be allowed here”. They started throwing out the mats on which the worshippers were sitting.

“They did not allow us to offer Juma namaz, said Ansari, adding, “namaz could not resume at the mosque ever since. We took our complaint to the local police station. The policemen on duty there tried to play down the offence of the Hindu men saying they just wanted to ensure compliance of the covid protocol,”

But the moot point here is that who gave them the mandate to enforce covid protocol. The police has no answer to the question.

Ansari says the police didn’t take their complaint seriously even when their attention was  drawn to the fact that they (the intruders) forced their entry into the mosque amidst chants of Jai Shri Ram. And how could they enter a place of worship with their shoes and chappals on. But no action has been taken by the police against them,” rued Ansari.

He disclosed that he could identify two persons from the mob,  Deepak and Pathak. Both are from Uttar Pradesh and office bearers of his society. He said the society pramukh refused to allow namaz until a decision is taken about the place.