New method to prevent littering in public places by Karwar CMC Jukaku Abdurraheem, Former President of Anjuman Hami-e-Muslimeen, Bhatkal Passes Away At 82 Two cops suspended for allegedly selling off seized luxury car in Mangaluru Mangaluru: Newlywed bride dies of a heart attack just a day after marriage Online vaccination registration in Karnataka cities, here is what you should know Over 200 iPhones worth Rs 2.8 cr seized from couple at Bengaluru airport

New method to prevent littering in public places by Karwar CMC Jukaku Abdurraheem, Former President of Anjuman Hami-e-Muslimeen, Bhatkal Passes Away At 82 Two cops suspended for allegedly selling off seized luxury car in Mangaluru Mangaluru: Newlywed bride dies of a heart attack just a day after marriage Online vaccination registration in Karnataka cities, here is what you should know Over 200 iPhones worth Rs 2.8 cr seized from couple at Bengaluru airport 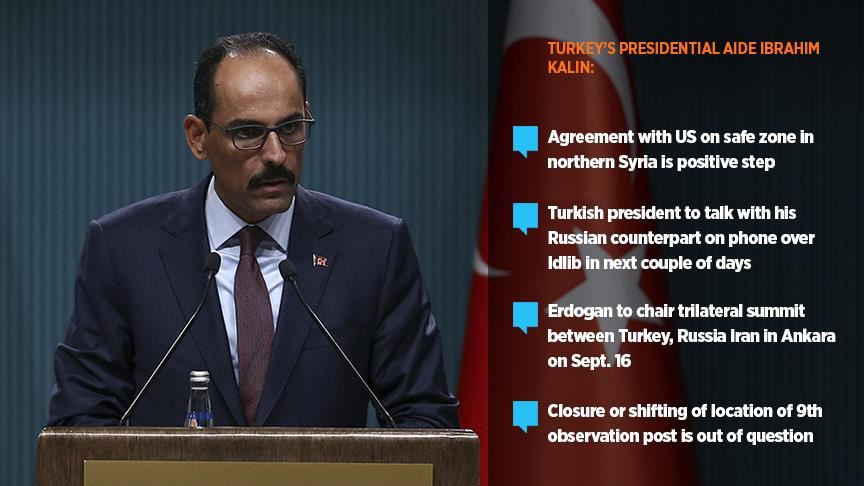 Speaking to reporters after the Cabinet meeting in the capital Ankara, Ibrahim Kalin said negotiations with the U.S. on the implementation, process and scope of the safe zone are still ongoing.

Kalin stressed that Turkish President Recep Tayyip Erdogan will speak with his Russian counterpart Vladimir Putin on the phone over Idlib in the next couple of days.

Erdogan will also have a phone call with the U.S. President Donald Trump over the safe zone at their earliest convenience on Thursday or Friday, he added.

"The U.S. commerce secretary and his delegation will visit our country in September. They will hold a couple of meetings to achieve the $100 billion trade target," he said, adding that the date of Trump’s visit to Turkey is not clear yet.

He also said that Erdogan and Trump might have a meeting at the UN General Assembly in New York on Sept. 17-30.

Referring to the establishment of the safe zone, he said joint patrols of the U.S. and Turkish troops will begin soon east of the Euphrates river, adding that the Turkish drones have already started to fly in the region.

"The protection of the demilitarized and the de-escalation zone in the region is especially important. Otherwise, the violation of the agreement and a humanitarian tragedy will be inevitable," he added.

Since 2016, Turkey has conducted two major military operations in northwestern Syria -- Operations Euphrates Shield and Olive Branch -- to purge the region of terrorist groups Daesh and the YPG, which is the Syrian branch of the terrorist organization PKK.

Turkish stance on its observation points in Syria

Following the Syrian regime's airstrike on Monday, which targeted Turkish convoy in Idlib, he said the closure or shifting the location of the 9th observation point is "out of question".

He stressed that the forces at all 12 observation points will continue to serve at their current posts.

On Aug. 19, the airstrike had killed three civilians and injured 12 others during a transfer to Turkey’s observation point in Syria’s Idlib.

Kalin reiterated Turkey’s call on Russia and the Syrian regime to end violations.

He also said that there will be a trilateral summit between Turkey, Russia and Iran on Sept.16 in the capital Ankara as a follow-up of Astana peace process.

"We will have a chance to work through the implementation of Idlib Agreement, establishment of the Constitutional Commission and the main parameters of the political process from now on," he added.

The Astana peace process, aimed at ending the Syrian conflict, was launched in January 2017 by Russia and Iran, allies of the regime, and Turkey. So far 13 rounds of talks have been conducted in Astana, Kazakhstan.

Turkey and Russia agreed last September to turn Idlib into a de-escalation zone where acts of aggression are expressly prohibited.

The Syrian regime and its allies, however, have consistently broken the terms of the cease-fire, launching frequent attacks inside the de-escalation zone.

The zone is currently inhabited by about 4 million civilians, including hundreds of thousands of people displaced in recent years by regime forces from cities and towns throughout the war-weary country.

Turkish operations in the region to continue

On May 27, Turkey launched Operation Claw against the PKK in the Hakurk region of northern Iraq. The ongoing offensive has neutralized dozens of terrorists so far.

PKK terrorists often use northern Iraq as a base to plan cross-border terrorist attacks on Turkey.

In its more than 30-year terror campaign against Turkey, the PKK -- listed as a terrorist organization by Turkey, the U.S. and the EU -- has been responsible for the deaths of some 40,000 people, including women, children and infants.

Syria has been locked in a vicious civil war since early 2011, when the Bashar al-Assad regime cracked down on pro-democracy protests with unexpected ferocity.

Since then, hundreds of thousands of people have been killed and more than 10 million others displaced, according to UN officials.