Relief from soaring heat in Bhatkal due to sudden summer rain 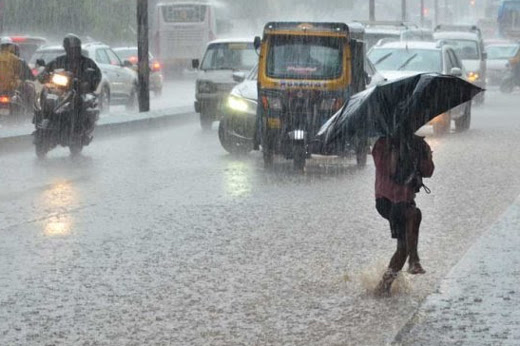 Bhatkal, 24 Apr 2019 [Fik/News Sources]: In Bhatkal and wide spread areas of the region, much relief to the scorching summer heat experience in several areas in Udupi district as also Kaup and Hebri brought some relief as moderate to heavy rainfall on Tuesday, April 23 proved.

The sudden rains affected traffic movement and many people, who were caught unawares were seen running for shelter from the rain.  Meanwhile roadside stalls and so on  reported damages in the rains.

Tree branches fell in several places in Udupi town and nearby areas. People were caught unawares as the downpour was sudden.

A huge tree fell on the roof of a shandy market belonging to Mudradi gram panchayat. Several trees along with electric poles were uprooted at Padukudooru, Kelakhajane, Muniyalu, Varanga disrupting power supply in the region.

Heavy rain coupled with gusty winds lashed Sirsi taluk for an hour, hitting voting for the Lok Sabha elections. Heavy winds blew away the shamiyana set up in front of Sakhi booth at Marikamba high school.

Two trees were uprooted near the poll booth at KHB Colony. Rainwater overflowed on Hubballi Road, Mastikatte Road and others areas affecting traffic.