'BJP will have last laugh': BSY confident of party winning 22 seats in Karnataka 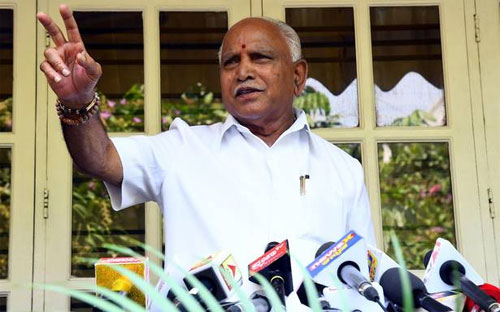 Bengaluru, 24 Apr 2019 [Fik/News Sources]: “BJP is definitely going to get 22 seats in the state in the Lok Sabha elections. The internal rivalry between Congress and JD (S) will escalate after the Lok Sabha results. There are all indications that the government will collapse by itself,” said Yeddyurappa.

Yeddyurappa spoke to the media at Shikaripur near here and said, “Leaders of Congress and JD (S) know that there is unrest among the MLAs in the government. So they should make attempts to keep them under their control. Instead accusing us is not correct. It is a fact that Congress MLAs are not happy. So those who are not content will come out of the party. Many Congress MLAs have not worked for the party in the Lok Sabha elections.”

Yeddyurappa also denied giving any statement with regards to the resignation matter of Congress MLA Ramesh Jarkiholi. “I have seen the statement given by Ramesh Jarkiholi in the media. I will not give any opinion on that. You will come know everything on May 23,” he said.

“Many MLAs including Ramesh Jarikiholi are not happy in the Congress party. However, it is an accusation of the coalition that we will topple their government. BJP will have the last laugh on May 23,” said Yeddyurappa expressing faith in his comment.